Previously in this whole medical odyssey, I was trying to reconcile my need to stay connected to the outside world with my frequent feeling like crap because of my illness and its attendant symptoms and side effects.

I really wasn’t doing a very good job of it. And I wonder if… no, I really don’t. I know I was using it all as an excuse to hide from everyone. I just don’t want people to see me at my worst. And even on the better days, I haven’t been anywhere near my best in a long, long time.

But sometimes you just have to keep going. 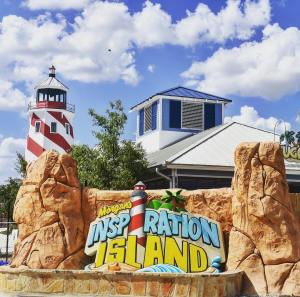 So a few weeks ago I braved the heat and joined Nikki for a visit to Morgan’s Inspiration Island. You might have seen some of the coverage online or on TV – as the world’s first fully accessible water park, it went viral pretty quickly, much to the pride and delight of all of us in the Wonderland family.

Though I hadn’t been able to see much of the construction since the groundbreaking ceremony nearly two years ago, of course I’d been following it from afar. So I was thrilled to witness the results of all that hard work. I even let myself get a little soaked (hot as it was, it was kind of necessary). I was pretty tired by the end of it, but I had a great time.

More outings followed. A serial in Leon Valley, with a few of my theater friends onstage and in the audience. (The love I received just for walking through the door is something I’ll carry with me for more than a while.) Hanging out at a friend’s house watching Doctor Who (and I’ll set down my thoughts on Series 10 soon). Even a short trip to my preferred comic store was a kind of victory for me.

Of course, chemo week inevitably comes along, and I inevitably feel like crap, physically and sometimes emotionally, for a few more days. But there’s always the promise of another trip out of the house. And I have a great support system making sure it happens – I even have a few outings planned for this weekend.

And then there’s the future.

A few months ago I bought my ticket for the next Gallifrey One convention. Granted, it’s not until February. And right now I don’t even know if I’ll be well enough to make the trip.

But it’s worth a try…

One thought on “Out of Hiding”