For better or worse, we live in a superhero culture. You can’t avoid it – the theaters are inundated with comic book movies of varying degrees of quality.

But there are very few superhero stories that have the depth and courage to comment on that culture, to ask what kind of heroes we need, what kind we want to be.

So it’s no small surprise to find that kind of vision coming from, of all places, The Tick.

Since his debut some three decades ago, Ben Edlund’s creation, and his myriad allies and adversaries, have had a lot of fun with the superhero genre. From the original comics to the classic animated series to the cult-favorite live-action series (with a career-defining performance by Patrick Warburton), The Tick has at once embraced and gently satirized the tropes and clichés of your comic-book universe of choice. That tradition continues with Amazon’s new series, but there’s something… more to this incarnation.

Overseen as always by Edlund himself, The Tick 4.0 takes place in a Dark And Gritty world straight out of the post-Christopher Nolan era of DC movies (it’s likely no accident that Nolan’s cinematographer of choice, Wally Pfister, directed the first two episodes). It’s a city where superheroes are real, but few and far between since the reign of The Terror (Jackie Earle Haley), who wiped out most of them before his defeat at the hands of Superian (Brendan Hines), a Superman surrogate turned media darling.

But then there’s Arthur Everest (Griffin Newman), an ordinary accountant with a tragic backstory that connects him to The Terror. He’s obsessed with proving that the supervillain is still out there, pulling the strings of crime in the city. Nobody believes him – least of all his sister Dot (Valorie Curry), who really wants to help him deal with his mental health issues.

But then, he meets The Tick. 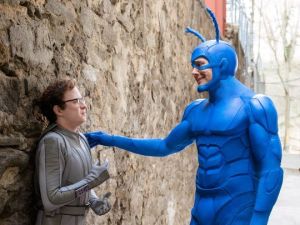 Played here by Peter Serafinowicz, that secret MVP of film comedy (most people will remember him as the “What a bunch of a-holes” guy in Guardians of the Galaxy), The Tick is burdened with glorious purpose, but not much else, least of all a functioning memory. He has the suit and the invulnerability of a superhero, so he pretty much just assumes that’s his destiny. And when they meet, he assumes it’s Arthur’s as well.

Arthur is a little more hesitant, of course. For a while, he’s not even sure this blue guy who keeps harassing him even exists outside of his wounded mind. But he comes to accept that The Tick can help him find The Terror. And he realizes that he can help The Tick find his memory. They join forces.

And their misadventures soon draw a rogues gallery of characters into their orbit, including Ramses IV (Michael Cerveris), a crime boss with a strange obsession with ancient Egypt; Miss Lint (Yara Martinez), his electrically charged and statically challenged lieutenant; and Overkill (Scott Speiser), an unhinged vigilante (there’s always an unhinged vigilante). Needless to say, chaos and hilarity ensue, right up until the Shocking Midseason Finale. But this time, it all just feels like it means a little more.

The cast, from first billed to last, is uniformly great. Haley (seen in flashbacks and hallucinations) is creepy, terrifying, and very very funny – usually all at once. Martinez brings menace and unexpected pathos to Miss Lint. Speiser is perfectly over the top. And one of our most beloved character actors, whose identity I’ll not spoil here, is reliably hilarious as Overkill’s AI sidekick.

But the show really belongs to Serafinowicz and Newman. Serafinowicz proves a worthy successor to Warburton and Townsend Coleman, while Newman makes Arthur more than a befuddled second fiddle. Together, they give the series a surprising heart.

There’s a moment in the later episodes that’s pretty innocuous on the surface, but for some reason it’s stuck with me. Arthur’s stepfather (Francois Chau, in a wonderful guest turn) is having a birthday party, and of course Arthur does his best to keep The Tick away. As you can imagine, our blue hero shows up anyway, much to his friend’s embarrassment. But the stepdad is genuinely delighted to have a superhero celebrating with him, while The Tick takes delight in being part of it. In that moment, he just wants to share in someone’s joy. Maybe he needs it too. And that’s the key to the show for me.

Watching Newman and Serafinowicz as their characters came together, I was reminded of another unlikely hero, Peter Capaldi’s Twelfth Doctor. Like Twelve, Arthur and The Tick are wounded souls, though they don’t necessarily know how much they really are. They could easily allow their wounds to define them. But instead, they choose to struggle. They choose to learn. And when the moment calls for it, they choose to do what is right and decent and kind.

And that’s what makes this version special. For all its comedy, this might be the first incarnation to see him and Arthur, unironically, as genuine heroes.

So, as you’ve probably figured out, I highly recommend Amazon’s The Tick.

The first six episodes of Season One are currently available on Amazon Prime, with the rest of the series due early next year. If you have access, I hope you’ll check out the series, and I hope you’ll enjoy it as much as I did.