They say into each art some rain must fall… or at least they would if I were They.

It was a lesson learned back in March, when organizers of Luminaria: Arts Night in San Antonio found themselves faced with the threat of storms on the very day they had planned to hold the city’s biggest arts gathering.  After considerable discussion, they took the side of safety and postponed the event from March 10 to May 5.

I’d have been there under any circumstances, of course.  But as Nikki was scheduled to MC one of the music stages (having done the job before, two years ago, she was invited back for this year), I wanted to be there to support her and take pictures.  So, I made sure to keep the new day open on my calendar.

When I arrived at the park on Saturday – and one of these days I REALLY have to master the art of being fashionably late – I wasn’t quite sure what to expect.  Each Luminaria has its own energy, its own character – I think that’s a big part of its appeal.  And from the later sunset to the higher mercury to all those logistical adjustments you know are going on behind the scenes, the character of Luminaria 5 would inevitably be reshaped by its postponement.  So I was curious to see how this year’s event would compare to the spirit of past years.

It was quickly apparent that the delay hadn’t affected the turnout, which was somewhere between 315,000 people (as artistic director Richard Rosen estimated) and 450,000,000,000 (according to my friend Christine, a first-time Luminarian – and I don’t think she’s that far off).  Either way, for sheer numbers, you have to say the event was a success.

And I think it succeeded on most of the other levels as well.  This year’s lineup of artists, though smaller than 2011’s, was no less eclectic, and their placement made good use of the space, including the famous arch, which hosted a rather fantastic aerial performance. 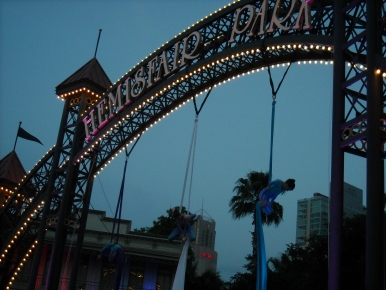 That was just one of many great pieces I saw.  Performance art, media art, visual art – it was all represented with some very creative presentations from the likes of Erik Bosse & S.T. Shimi, Veronica Hernandez & Eddie Felan, Bianca Pitman, the Proxy Theatre Company, title sponsor Rackspace, Urban-15, and many more.  (Bear in mind that these are just the ones whose names I immediately remember – there was much more going on than can fit into this brief digest.  My sincere apologies to anyone I missed along the way.)

For me, if any one piece can be said to exemplify the spirit and ideals of Luminaria, it might be “Art Is Luminaria”, a beautiful presentation from Ya’Ke that combined a powerful spoken-word performance by Mikala Gibson with images of the creative act in all its glory (including a love letter to film that featured one Nikki Young – she really was everywhere that night).  Mere words or stills can’t do it justice – this is one you really had to see live. 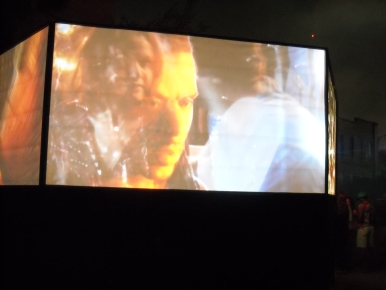 After doing my best to see as much of the event as I could, I ended the night where I began it.  On Stage 5, Nikki was doing her usual great job of engaging the audience and putting the artists in the spotlight (much as she does on her Great Day SA segment, “An Affair of the Art”).  With a terrific Americana band (the April Hall Band), a Latin legend (Jonny Martinez y Grupo Bravo), and a band that played the intriguing fusion of Jewish tango (Mission City Klezmorin), that one stage made a nice microcosm of the event.  Fun, electric, eclectic, educational, and all of them at once – that was Luminaria. 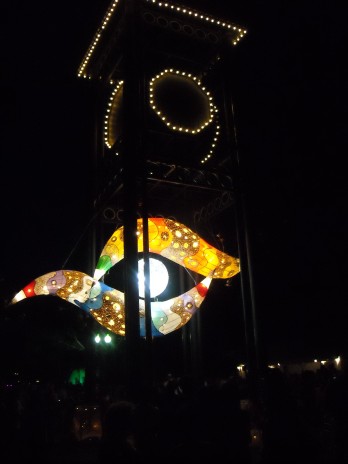 Until next year – and sooner than that – “be seeing you…”