It probably goes without saying (so of course I’m saying it anyway) that you really can’t have Doctor Who without the Daleks.

Created by Terry Nation, the Doctor’s most famous enemy was introduced in the first few weeks of the show’s existence, and (as legend has it) quickly sent younger viewers scrambling behind the sofa. Since then, nearly every Doctor has had to contend with them onscreen, and every showrunner has had to figure out how to keep them as frightening as they were in that very first encounter.

With the latest episode, Steven Moffat and Phil Ford have attempted that feat by introducing them to someone just as frightening…

“Into the Dalek” owes much to Robert Shearman’s 2005 episode “Dalek,” especially with its basic McGuffin: the Doctor confronts a captive Dalek and is thereby forced to confront his own darkness (that whole “look into the abyss” theme I alluded to with my choice of title).

But in many ways – and I’m not sure whether this comes from the episode itself, or the memory I brought to the experience of viewing it – it reminds me just as much of “Genesis of the Daleks,” Robert Holmes’s seminal Fourth Doctor story. Both episodes force the Doctor to make a choice that will define the fate of an entire race. But while one Doctor is able to find solace in the consequences of his choice, the other is left questioning his very nature.

“Do I have the right? Simply touch one wire against the other and that’s it. The Daleks cease to exist. Hundreds of millions of people, thousands of generations can live without fear, in peace, and never even know the word ‘Dalek.'”

“Then why wait? If it was a disease or some sort of bacteria you were destroying, you wouldn’t hesitate.”

“But if I kill, wipe out a whole intelligent lifeform, then I become like them. I’d be no better than the Daleks.”

That’s the defining moment of “Genesis of the Daleks”: The Doctor stands with two wires, the power in his hands to wipe out an entire civilization before it can go out into the universe (it’s an eerie parallel to his earlier confrontation with Davros, the creator of that civilization). Sarah Jane and Harry encourage him to do it, to think of the greater good, but the Doctor questions whether that greater good is worth the evil he must do in its name.

In the end, he cannot do it. But even while he does not destroy the Daleks, he is able to delay their escape, and he’s able to comfort himself with the knowledge that eventually, some good may come of all of this. In that moment, the Doctor’s love of life is stronger than his hatred of the Daleks. 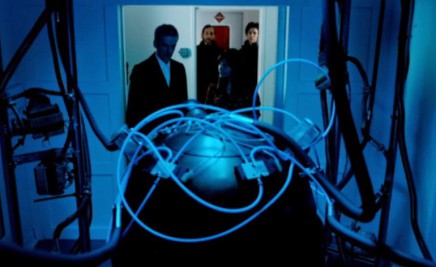 It’s not so simple for Twelve. When he first encounters “Rusty” (so nicknamed by the Doctor, in another of those great little Tuckeresque moments), he’s skeptical, but intrigued by the idea of “a Dalek so damaged it’s turned good.” But his definition of “good” doesn’t seem to go beyond ‘a Dalek that wants to destroy all the other Daleks.’

That blind spot gets everyone into serious trouble. When the Doctor succeeds in repairing Rusty (from the inside, in a dramatic hook lifted from Fantastic Voyage), the Dalek promptly reboots to his default setting of EX-TER-MI-NATE!!, prompting some unseemly gloating from a Time Lord proven right. It takes his “carer” to literally slap some sense into him, as Clara has to remind him that there are human lives at stake.

When the Doctor tries to restore the Dalek’s morality, we see the flip side of Four’s quandary. Instead of exterminating an entire race, this Doctor now seems to believe he can use Rusty to transform the very nature of the Daleks. (This level of delusion recalls the “Time Lord Victorious” of “The Waters of Mars” – if Phil Ford’s Doctor Who scripts have a trademark, maybe that’s it.)

The delusion collapses entirely when the Doctor allows Rusty a glimpse into his own mind… where the Dalek immediately latches onto his deep-rooted enmity, and resolves to destroy all the other Daleks after all. The humans he’s saved don’t seem too disturbed by this (for obvious reasons), but it’s a devastating blow to a Doctor who’s already questioning whether he’s a good man. With Rusty’s parting words – “YOU are a good Dalek” – poor Twelve is forced to face a truth he’d long buried: since his first encounter with the Daleks, he has always been a War Doctor.

It’s a troubling episode, and of course Peter Capaldi plays it beautifully. But honestly, I’m still not sure how I feel about the whole thing (which is the likely reason this post took so long to finish). The idea of putting the Doctor inside a Dalek never quite pays off, as those sets feel more like the interior of a Dalek spacecraft than of a Dalek himself. And as much as I love seeing the Doctor’s flaws and complexities explored (especially by my favorite working actor), this script was a little too on the nose, a little too eager to remind us of its own darkness.

That said, “Into the Dalek” does seed some promise for the rest of the series, particularly with the character of Danny Pink. I like the idea that Danny’s a kind of mirror image of the Doctor – another man haunted by his war experiences, trying to move past it and do better, be better. And Samuel Anderson does so much with his limited screen time that I’m looking forward to seeing that relationship develop.

In the end, I guess it all goes back to Clara’s words:

“You asked me if you were a good man. And the answer is, I don’t know. But I think you try to be. And I think that’s probably the point.”

So, even if this episode might disappoint, at least we can try again next time.

One thought on “Whoever Fights Daleks…”