Way long ago, back in my Tulane days, one of my favorite things to do on a weekend was to go to McAlister Auditorium and see whatever movie was playing that night. It didn’t matter if the film was 2001 or Brazil or Flash Gordon or Highlander II, everybody went to see it.

I still remember the experience of seeing Back to the Future there. It was and is one of my favorite movies, and I will always maintain that Christopher Lloyd’s Emmett Brown is one of the great screen performances. I knew the original film so well that I was lip-syncing it during the screening at McAlister. But somewhere along the way, I forgot what I was doing and just got caught up in its magic all over again.

Fans of Marty and Doc know that feeling well. And they know that the story behind the film, and the franchise to follow, is a compelling tale in its own right. Now the tale has finally been set down in print, in an excellent new book. 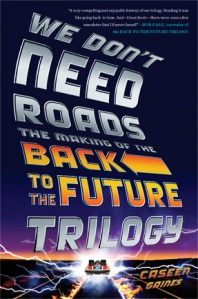 Written by superfan Caseen Gaines, We Don’t Need Roads: The Making of the Back to the Future Trilogy tells a lot of tales you may have heard before, and many you probably haven’t. Gaines’s affection for the films is matched only by his meticulous research, including over 500 hours of interviews with most of the cast and crew (there are a few exceptions, but so many people share so many memories and insights that you’ll forget to miss the ones who didn’t).

And while Gaines excels in finding a story, he’s even better at telling it. Each chapter begins with one specific day in the history of the franchise, then moves backward and forward in time to explore all the personalities and events that led to that day, and everything that followed. It’s a great way to bring the reader into the world of the films.

No matter how much you may already know about the history of Back to the Future, you’ll still learn something you might not have known before. The full story behind the original Marty, and what happened when Eric Stoltz was replaced. The misadventures of working with Crispin Glover. The name of the guy who really sang “Johnny B. Goode.” Even in the film’s controversies, Gaines gives a full and fair account.

But while it’s full and fair, it’s never dry. Caseen Gaines clearly loves the film, and more than that, he loves film in general. And as messed up as the industry can be, he knows that there are still moments when everything comes together. The right people, the right place, and of course the right time.

And that’s it for now. Thanks as always for following along.

See you in the future…

One thought on “A Book Of Its Time: “We Don’t Need Roads””