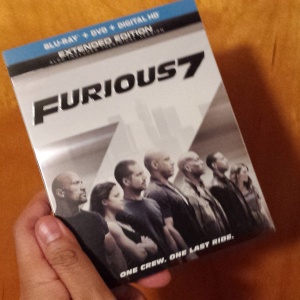 Yes, that’s my hand holding a copy of Furious 7. I’m a San Antonio guy, supporting local talent. And this movie’s a great showcase for one S.A. native. The story below…

J.J. Phillips at the premiere of “Furious 7”

As an actor, J.J. Phillips knows that being an “overnight success” takes hard work. And now, he is seeing his own work pay off.

“I’ve been acting for a long time and it’s been an amazing journey so far,” he says. “It’s nice to see some of that hard work starting to pay off. I’ve been blessed with the opportunites I’ve had so far.”

Earlier this year, the San Antonio native had a featured role in the action blockbuster Furious 7, which has grossed over one billion dollars at the box office. Phillips plays a billionaire prince at a party in Abu Dhabi, where the film’s heroes (led by Vin Diesel and Paul Walker) must steal a vital piece of technology; MMA superstar Ronda Rousey portrays Kara, the head of his security detail. 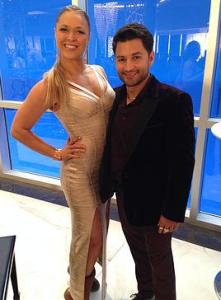 J.J. Phillips and Ronda Rousey on the set of “Furious 7”

“Having an opportunity to be part of a film of this magnitude was an amazing experience,” Phillips recalls.  “Just seeing all the work that went into every shot was remarkable. I felt like a billionaire, and my bodyguard was Ronda Rousey – it was a dream come true!”

Furious 7 was the final film for Walker, who was killed in a car accident during production; his brothers, Caleb and Cody Walker, helped complete the film by standing in for him. “I filmed my scenes with Paul early on,” Phillips remembers, “and I met his brothers at the premiere. Paul was a great guy, one of the nicest actors I’ve met. We were all devastated when he died. So everyone was committed to finishing this film and honoring his memory.”

J.J. Phillips with Will Chase (l) and Connie Britton on the set of “Nashville”

In addition to his appearance in Furious 7, Phillips is returning to ABC’s hit series Nashville, where Phillips has a recurring role as a photographer. “When you’re a guest star on a TV series, you never know if that’s going to be your only appearance,” he says, “so when the producers asked me back, I was thrilled. Working with everyone on Nashville has been such a great experience.”

Through all his experiences, Phillips has always remembered his roots. “Vin Diesel always talks about the cast and crew of the Fast & Furious films as a family,” he says. “And I’ve been blessed to be part of some great film families. But my first family, my home, is in San Antonio. And it makes me happy that I can always come back here.”

Furious 7 is now available on BluRay and DVD. The fourth season of Nashville began on September 23; viewers can watch for Phillips on an upcoming episode early in the season.