In retrospect, this episode might have been doomed from the beginning.

Any episode that came after Peter Capaldi’s classic performance in “The Zygon Inversion” (which I’m still thinking about today) was going to suffer by the mere fact of its juxtaposition. So you can’t fault Doctor Who for choosing such a radically different episode to follow it.

But radically different doesn’t always equate to good. And “Sleep No More” suffers less from the juxtaposition than from one fatal gimmick.

To begin with, Mark Gatiss’s “Sleep No More” is the second Base Under Siege tale we’ve had this season, following “Under the Lake” and “Before the Flood” (though if you count the village of “The Girl Who Died,” that makes three). Though that might be a bit too many, the repetition isn’t a deal breaker in and of itself. After all, as Ebert famously said, “A movie is not about what it is about, but how it is about it.” Just because it’s been done before doesn’t mean it can’t still be done well.

And then the episode starts and we get into trouble. 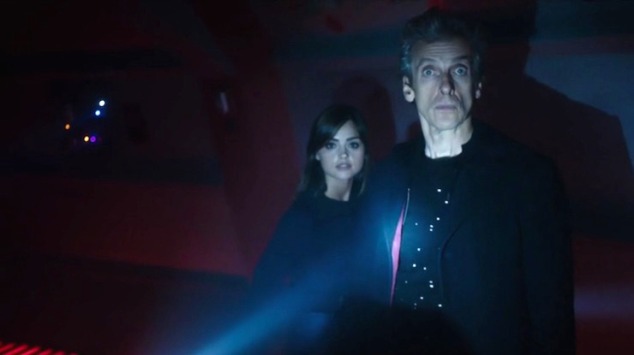 A team of space marines arrives at an abandoned space station and finds only Twelve and Clara, who randomly showed up to investigate. It isn’t long before they’re all being chased by strange creatures. And it isn’t long before they find the mad scientist behind them (Reece Shearsmith, who deserves much better), and we discover that these creatures are the products of a mysterious sleep technology and are made of rheum. Yes, that nasty stuff that collects in the corners of our eyes while we sleep.

(Much to Twelve’s resigned annoyance, it’s Clara who gets to name the monsters this time around. And while “Sandmen” isn’t all that remarkable, it’s much better than “Rheumatoid.” So the episode has that going for it.)

It’s all fairly generic, but even that isn’t a deal breaker. The deal breaker is that this is a found-footage episode.

The idea of “found footage” – the conceit that the film you’re watching was assembled from footage of something that really happened – has been around for a long time, but of course it was The Blair Witch Project that gave it mainstream popularity. Since then, for better or worse, contemporary filmmakers have tried to make the next Blair Witch or Paranormal Activity. And if you’ve seen any of them, you know it’s almost always for worse.

(My exception is Europa Report, a wonderful sci-fi thriller from a few years ago that’s genuinely suspenseful. But the catch is that it’s actually not a found-footage movie. It’s well worth seeing, and I’ll have more to say about it in the future.)

I think the reason found-footage stories don’t work is because the found-footage genre doesn’t work. Once you’ve seen one Blair Witch or Paranormal Activity, the shock and suspense wear off. We already know nearly everyone is going to die, so why should we care what happens to them? And if we recognize the actors, then there’s even less investment. So a gimmick designed to provoke engagement instead creates distance. I think that might actually be ironic.

Even worse, there’s not one moment in “Sleep No More” that feels like genuine amateur video. The camera’s always shaking around in that exaggerated way it does when you’re trying to look like an amateur photographer but you forget that even amateur photographers tend to be more steady than you make them out to be. There are multiple angles that should be impossible for the format (even more so when you factor in the logic – the Sandman infection hijacks the optic nerves of its victims, which still doesn’t explain how that scientist manages to record and transmit them).

And the ending is a twist too far (and this is coming from someone who liked “Kill the Moon”). In a revelation that seems lifted from “Dead Air” (a lesser audiobook in which Ten battles a monster made of sound), we discover that the monster has been contained in the very broadcast we’ve been watching, and our watching has released it. I don’t mind the metafictional part of it (after all, “Before the Flood” began with Twelve explaining the episode to us). But coming after such a weak story, it feels like a cheap, unearned moment in an episode that earned so few.

I really feel bad for disliking this episode so much. Gatiss is a terrific writer. He gave us “The Unquiet Dead” and “Cold War” and “Robot of Sherwood.” He’s usually so much better than this, and Series 9 has been SO much better than this, that I’m willing to write “Sleep No More” off as one bad day. One bad choice. The one bad loss that inevitably comes after a long winning streak. That’s part of the deal. It might suck, but it’s still part of the deal.

I have a feeling they’ll do better next time.

And until next time, thanks as always for following along.

One thought on “Found and Lost”