And when you go back to the stars and tell others of this planet, when you tell them of its riches, its people, its potential, when you talk of the Earth, then make sure that you tell them this: It is defended!
– The Tenth Doctor

You’re not the first lot to have come here – oh, there have been so many. And what you’ve got to ask is, what happened to them?
– The Eleventh Doctor

I’m not really a fan of the current trend toward dark and gritty superheroes. I accept that there’s a place for them, and when you’re talking about characters like Daredevil or the Punisher (and yes, Frank Castle is technically not a superhero, but he walks in that universe), there’s really no better way to play them.

But I grew up with the Superman of Christopher Reeve and Richard Donner. My Batman is the Chandler archetype of Kevin Conroy and Paul Dini, “neither tarnished nor afraid.” They’re characters who fight the darkness because they still believe in the light. I miss that kind of hero.

Which brings us to the hero of this post. The Earth’s most constant defender. “The one, the only, and the best.”

Of course, The Doctor.

After a year away – a year that saw too much darkness, both in the world and in my own life – Doctor Who returned to the world’s TV screens last night with Steven Moffat’s “The Return of Doctor Mysterio,” a romantic superhero romp that pays tribute to that same Superman I’ve loved all these years. It’s mostly silly and mostly slight and really quite wonderful. 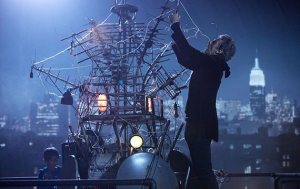 We begin, of course, with the origin story, when a sick boy just happens upon a strange man hanging outside his window. As entrances go, it’s par for the course for Twelve, who quickly takes a liking to the young comic-book fan, lets him in on his plan of the moment (whatever it is – it’s all very technobabbly, but he’s the Doctor, so just go with it), and inadvertently gives him superpowers. And that’s all before the credits.

24 years later, Grant (now played by Justin Chatwin) is a mild-mannered nanny for the infant daughter of Lucy Fletcher (Charity Wakefield), a crusading reporter whose maiden name is one of the many inside jokes that add to the story’s charm. And he’s also the mysterious Ghost, fighting evil and saving people. She, meanwhile, is investigating the Harmony Shoal corporation, which of course has evil designs on humanity. (This will surprise no one who remembers Harmony Shoal as those zip-headed baddies from last year’s Christmas special.) And of course, when there’s an alien race threatening Earth, there’s that one man who will always stand in their way.

Dr. Sim: Who are you?
The Doctor: There have been many attempts to conquer the Earth. I’ve lost count. Not one of them has succeeded, not a single one. They all lost and burned and ran. That’s who I am.

It goes without saying – so of course I’m saying it anyway – that Grant and Lucy cross paths with Twelve and Nardole (Matt Lucas, last seen as a cyborg maitre’d – how he got his body back is addressed in a few throwaway lines, so again, it’s best to just go with it).  And you’ve likely already guessed that Grant, the Ghost, and Lucy will reenact that same love triangle that Reeve and Margot Kidder played to perfection nearly 40 years ago. But you might not imagine that it still holds up, thanks to performances from Chatwin and Wakefield that are both light hearted and good hearted.

That kind of spirit runs through the entire episode. The script (one of Moffat’s most linear stories in years) is filled with great asides and in-jokes, including Twelve’s take on what that spider really would have done to Peter Parker. Lucas doesn’t have much to do early on, but when Nardole steps behind the TARDIS console, he really steps up, as we see the confidant he has become to Twelve. And when we realize why the Doctor thinks he needs a confidant, the story’s not so silly and slight anymore.

The Doctor we meet here is in mourning. He misses River Song too much. And like so many who grieve, he’s thrown himself into his work. Stopping Harmony Shoal is more about having an occupation than about saving the Earth. When he meets Grant and Lucy, he finally understands the lesson of his final date with River. the same lesson Me tried to teach him in “Hell Bent.” You can’t separate the sadness of an ending from the beauty of a new beginning. They make each other possible.

And when he remembers that, he’s ready to be a hero again, as he’s been for thirteen generations.

Dr. Sim: The humans have no plan at all.
The Doctor: That’s where you’re wrong. They have the same plan they always have.
Dr. Sim: What plan?
The Doctor: Me. 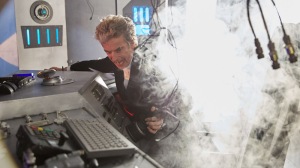 In the end, “The Return of Doctor Mysterio” is almost a kind of regeneration story. Not a regeneration of the Doctor’s form, but of his spirit. As a character, he’s having more fun than we’ve seen him have in a long, long time. After all the loss and pain he’s dealt with over the last two seasons, he’s back.

Thanks as always for following along. Until next time…

One thought on “Another Strange Visitor From Another World”