We look to season premieres to set the tone for what’s to come. So, looking at the season premiere of Doctor Who, it seems (and I hope I’m right) that the relationship of Twelve and Bill will take precedence over the usual twists and turns we’ve come to expect from a series run by Steven Moffat.

That said, there’s still room for some plot. And “Smile” at least has an interesting one. 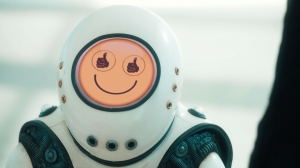 Written by Frank Cottrell Boyce (whose “In the Forest of the Night,” despite evoking one of my favorite Talking Heads songs, was not one of my favorites), “Smile” lands Twelve and Bill in an empty space colony (portrayed by Spain’s dazzling City of Arts and Sciences). The colonists haven’t arrived yet, the skeleton crew that usually prepares for them is nowhere to be seen, and the population seems to consist entirely of robots that speak in emoji and monitor the moods of their human[oid] guests. (Needless to say, this delights Bill and annoys the hell out of Twelve).

OF COURSE there’s something sinister going on, and it soon transpires that said emojibots have turned “skeleton crew” into a literal statement of fact, killing anyone who doesn’t express happiness at all times. So Twelve and Bill have to keep those smiles on their faces even as they resolve to do something about the bots before those colonists arrive. It nearly leads to war or genocide or something close akin, before the Doctor steps in and compels a deus ex machina resolution.

As Doctor Who plots go, it’s a good one, certainly better than “In the Forest of the Night.” But I can’t help thinking that Boyce missed out on some rather wonderful opportunities here. This could have been a cracking bit of satire, a commentary on the way we use social media to hide in plain sight. We overshare the sunnier facets of our lives to mask the ones we’re not so happy with (I know I’ve been guilty of that, especially since my diagnosis), and we suffer for it. Boyce could have run with that and made a much sharper episode. It’s kind of a pity that he never goes there.

But as before, the performances carry the show. Peter Capaldi and Pearl Mackie deliver on the promise of “The Pilot” and continue the growing teacher/student relationship between Twelve and Bill. She doesn’t just ask questions of him, but she also questions and challenges him, and as Donna once pointed out all those years ago, he NEEDS that.

So, despite the disappointment of the story itself, I enjoyed this episode. Its weaknesses in plot are shorn up by its strengths in character. And sometimes that’s enough.

Thanks once again for following along. Until next time…

One thought on ““Smile, Though Your Heart Is Aching””