As I write this, we’re nine days from opening night for The Love List.  And in our third week of rehearsals, the play continues to take shape, each run-through bringing us closer to that one moment we’re all striving for. 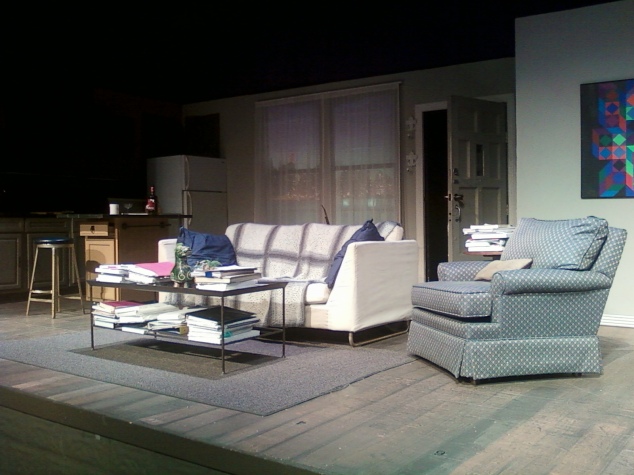 The greatest leap forward has been the building of our set.  While we still have a few touches to add, you can already see how nicely Jim and the Cameo crew have brought the place to life.  They’ve brought in a lot of details that really tie the room together (yes, including a rug), and it’s feeling less like a stage and more like a place someone could actually live in.

That’s great for the actors, who now have a ready playing field for their performances.  The blocking is coming together, under Kathleen’s continued guidance, and Nikki, Joel, and Byrd are growing more comfortable and confident with their dialogue.  And as they get to know their characters, they’ve added little touches of their own, those little moments that make a play work (I seriously think we should consider promoting this with a music video of one of Nikki’s singing performances).

For my part, I’ve enjoyed being behind the curtain again, and I hope I’ve been some help to Kathleen and the actors as we all find our way to October 29.  It goes without saying (so of course I’m saying it anyway) that there are a lot of details to coordinate in any production, whatever the size – props, sound, you name it – so I’ve been doing my best to help bring all the pieces together and make sure they fit.

(And yes, that has included stepping in to read for actors when they’re not available.  My official I’m-not-an-actor pose may have taken a few more hits from that…)

With each rehearsal, the pace is getting tighter, the energy’s rising, and our enthusiasm continues.  And I believe that energy will carry over to the audience, so I hope you’ll be there to share in it.

To which end, online ticket sales for the play’s opening are now live.  And group rates are also available for parties of 10 or more (please e-mail Nikki for the details).  With just over a week to go, be sure to order them soon to make sure you’ll have your seat.

Thanks as always for following along.  I’m looking forward to seeing you at the Cameo during the show’s run (that’s October 29-November 27, just as a friendly reminder).  Until then…