And then, there is THE score…

By now, the story behind the making of Star Trek: The Motion Picture is as well known as the story it tells onscreen (and it might be more interesting too).  Rushed into production by a studio with Star Wars in its eyes, the film was locked into a release date that gave the cast and crew little time for editing or special effects… or a fully-realized plot, for that matter.  It’s a wonder the film turned out as well as it did.

Of course, being 8 at the time, and fairly new to the Star Trek franchise (it’s entirely possible that at that point I’d only seen one episode of the original series), I knew none of that when I first saw the film.  I thought it was pretty awesome.  I loved seeing those characters on the big screen.

And then there was the most important character of all.

The music of Jerry Goldsmith. 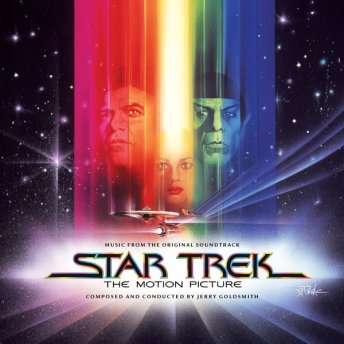 If I’d had the words back then to articulate why I loved Goldsmith’s score so much, they would have included “epic” and “sweeping” and “romantic” and “soaring” and “majestic” and all the like.  Having a few more words now – and maybe a little more awareness of how film music works, and works on you – I’ll add that it’s at once familiar and alien, classic and modern.  Goldsmith loved to experiment with new sounds, with instruments you never knew could be instruments, and on Star Trek: The Motion Picture, he brought orchestral and electronic instruments together (including Craig Huxley’s iconic Blaster Beam – once you’ve heard it, you will never forget it) to create something entirely new, entirely original.  That he accomplished all of this within the chaos of the film’s post-production schedule is but one more testament to his genius.

We so rarely recognize the defining moments in our lives when they happen.  And I didn’t then either.  It’s only just recently that I’ve come to appreciate the influence Jerry Goldsmith, and his Star Trek music in particular, has had on me and my worldview.  But I’m pretty sure I’m a Trekkie today because of the score to Star Trek: The Motion Picture.  I know it was the beginning of my lifelong obsession with film music.  And I’m beginning to realize that its themes have subtly shaped my ideals, both as a filmmaker and as a person.  That main title still gives me chills.  Every time I hear it.

I’d recently written that some films are “so ingrained in the cultural, intellectual, and emotional DNA of ‘Lee Hurtado’ that when you see them, you might actually understand me a little better.”  That’s most true of this score.  More than any other score by any other composer, this may be the one that best defines the concept of me.

So when La-la Land Records announced the release of what they promised would be a definitive edition of the ST:TMP soundtrack, I was not a little excited.

And they made good on their promise, with a three-disc set that encompasses not merely the complete score (pulled from the original masters, and sounding better than ever), but the entire odyssey of its creation.  Goldsmith’s unused original cues, composed before he found that classic Star Trek sound, are here, and they’re brilliant.  Alternate cues (used on previous soundtrack releases) are here.  Isolated tracks spotlighting Huxley’s Blaster Beam performances.  Two I Am Not Making This Up tracks: a disco version of the main theme by Bob James (of Taxi fame), and a pop-ballad version of the love theme by Shaun Cassidy (admit it, you’re curious).  And one track that for me is an incredible Easter egg: raw takes from the recording sessions, featuring the very first takes of that main theme.  It’s a magnifcent presentation of a score that deserves no less.

The soundtrack’s a limited edition of 10,000 copies, and within a week La-La Land had already sold half its planned run.  If you haven’t already ordered your copy, put in your order ASAP.  This isn’t simply an essential release for Trekkies, or for Jerry Goldsmith fans, or for film music fans.  It’s just plain essential.

And so ends this chapter of the voyage.  Thanks as always for following along – until next time, “I shall simply say ‘good luck’…”

One thought on “How The Voyage Began”