Over six weeks, we’d had to make occasional adjustments for locations, actor availability, and especially the weather.  We’d faced drought one week, deluge the next.  But Nikki and Chadd had brought a great team together, so we were able to keep moving forward, knowing that as long as we kept doing our work, it would still come together.

And in our last weekend of principal photography, it really did come together. 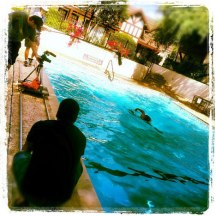 Over those three days, we shot at two locations.  Saturday brought us back to the same location where most of our action has taken place so far, as we wrapped Jason’s and Gabi’s scenes.  It was another long day, but a very productive one – and as you can see, we did get to enjoy some poolside time.  So it all worked out pretty well. 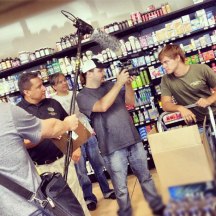 The next day brought us to Greenfields Market as we shot more important scenes, with three more actors joining Shane: Three Yellow Roses veteran Maxine Greco, VOSOT‘s Pamela D. Hardy, and Eddie (taking his turn in front of the camera after doing a great job on the other side of it).  They all did terrific work, helping us finish the day well ahead of schedule, and I think after the heat of outdoors, we were all grateful for some air conditioning.

Monday, our last day, brought us home, as two more of San Antonio’s finest actors played their scene in front of Chadd’s camera. 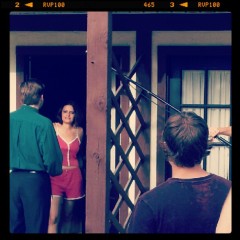 That’s Michael Burger facing Nikki.  We’ve worked with him behind the scenes on other projects (Four Minutes Till The End and Fantasy, Inc.), but I’m pretty sure this is the first time we’ve had him as an actor.  And, like all our cast and crew, he delivered, and helped us end our shoot on a high note.

Of course, the end of principal photography is far from the end of the process – there’s still more work to be done, especially in post-production.  But we have officially wrapped on Magnolia.  And it feels really good to say that.

In that spirit, thanks to everyone who helped make that possible, on both sides of the camera.  We couldn’t have done it without any of them.  (And can I just say how cool it was to have all these actors together in the same film?)

And I couldn’t do this without you, the readers.  So, on behalf of all of us, thank you.  We appreciate your shares and comments and your constant support, and we’re looking forward to celebrating with you all when these films are finally… well, arranged.

So, until the next project and the next dispatch, “be seeing you…”