When Nikki signed on to host a show on #goodjobtexas, I had a feeling there would be much more to #youngandfresh once we really got into it.  One of Nikki’s gifts is the ability to look past the present moment of a project and see its future potential.

And there’s a LOT of potential in this one.

Since #youngandfresh was launched at that first block party some months back, Nikki has hosted an eclectic range of very talented young artists, all while continuing to expand the show’s format with new segments and guests from the community at large. 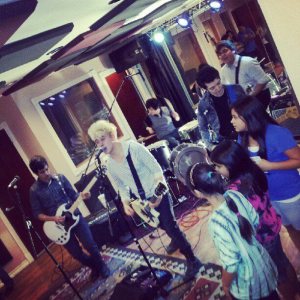 It all came together in October – dubbed #rocktober, in keeping with the hashtag-inspired brand of the network – as Nikki, Brandon Faucett, and the #goodjobtexas crew staged four ambitious episodes, each featuring both a full band (two, for the second week) and a studio audience.

Our artists were Ready Revolution, Nevermind Tomorrow, Redd Loves Blue, X-Factor star Jessica Marie Espinoza, and Islands & Tigers.  They all got into the spirit of the show, along with our audience.  And with a Halloween show that saw our hosts in full costume (along with some of our guests), the month definitely ended on a high note.

Of course, none of this could have happened without a fantastic team behind the scenes.  And #rocktober proved a great test, and a great opportunity, for the newest members of the #goodjobtexas crew:

Just a little further behind the scenes, Brandon Faucett will continue to make sure show, hosts and guests will look and sound great.  And working with him, we’ll have Brandon Fletcher, Shunsuke Kitagawa, and Roy Mendez.

And I feel pretty confident in saying you’ll like what we have lined up, starting in November.  We’ll be celebrating #girlpower all month, with live broadcasts resuming on November 8, this time from The Rose Theatre Company (a return engagement for me and Nikki after her hit acting workshop).  The full lineup of performers will be released soon, so watch our just-launched Facebook page (soon to be followed by a full-on website) for all the details.

Have those mobile devices ready, and until the next show, “be seeing you…”