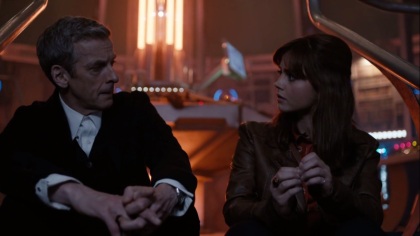 – from “Into the Dalek,” by Phil Ford and Steven Moffat

They were the central questions of Series 8 of Doctor Who. What kind of man is this new Doctor? Is he a hero? Does he still care? Is he even capable of caring anymore?

It’s to the show’s credit that it dared to ask those questions, to explore the darker sides of life with, and as, the last Time Lord. Asking those questions gave us stories like “Listen” and “Flatline.”

And it’s to the show’s credit that in the end, it found a way to answer them.

Throughout the season, there’s been an interesting tension between the silly and the serious, between plot and character. Think of ‘The Caretaker,” or “Kill the Moon” – there were wonderful character moments throughout the episodes, but they were often juxtaposed with premises that even I’d call ridiculous (I’m a fan of both those stories, so that’s not a criticism, merely an observation).

Looking back, I’m more convinced that this weird [im]balance wasn’t a bug. It was a feature, or at least it was intended to be. Those moments you thought were the most ridiculous were meant to leaven or underscore the real point: how it affected the characters. It was never really about the silly-looking killer robot. That was just a way to get the characters where the show needed to be so we could see what they were going through. 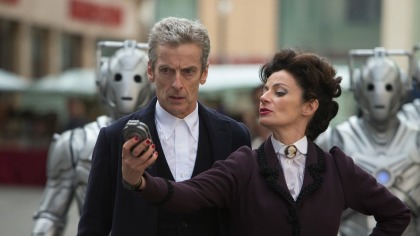 And the season finale was a perfect example of this. “Dark Water” and “Death in Heaven” brought back the Doctor’s greatest nemesis, the Master (now regenerated into Missy, and played with relish and glee by Michelle Gomez). And being the Master, of course her plot was convoluted and not altogether logical: Raise an army of Cybermen from Earth’s dead, and then hand that army over to the Doctor so he could fight evil with the force he really needed, the force she thought he really wanted. (And then there’s the little matter of UNIT kidnapping the Doctor and declaring him President of Earth.)

Clara was driven nearly mad with grief at the loss of Danny (which sets “Dark Water” in motion), to the point of betraying the Doctor in order to bring her lost love back. This grief was compounded when Danny fell victim to Missy’s plan and became a Cyberman himself, and it broke her entirely when Danny gave up his last chance to return to her in order to save a child he had killed in combat.

Meeting that child again, in the Nethersphere, Danny was forced to confront his own darkness, the very darkness he always called out in the Doctor. Back when he was introduced in “Into the Dalek,” I’d suggested that Danny was a mirror to the Doctor; each reminded the other of a part of himself he regretted, a part he wished he could bury. We’d seen the Doctor’s regret throughout the series, but in these final episodes, we finally saw Danny’s, and it was a powerful moment.

Even the Mistress was given some measure of sympathy. She went out of her way to tell us she’s insane, but we soon realized she was just insanely lonely. Missy only had one friend left in the universe, and of course it was her mortal enemy. Their eternal chess match was pretty much the one thing left to give her lives meaning, and in the end, as she faced “death” yet again, Missy’s signature taunt – “Say something nice” – took on an unexpected poignancy.

“Of course. The Earth’s darkest hour and mine. Where else would you be?”

If “Dark Water” continued the theme of forcing the Doctor to make terrible choices, then “Death in Heaven” subverted that theme by repeatedly bringing his friends forward to save him from those choices. When the only way to learn Missy’s plan was to complete Danny’s cyberconversion, it was Clara who took the screwdriver and did it. When the Doctor couldn’t trust himself with the power of that army, it was Danny who took command and ordered their (and his own) self-sacrifice to save Earth.

And when the Doctor tried to save Clara from the burden of killing Missy, it was a Cyberman who spared him the burden of doing it himself. Of course, it wasn’t just any Cyberman. Somehow (and it’s probably best not to seek the how or why of it), another of those converted dead retained his own humanity. And it could only be the Doctor’s truest friend, the immortal Brigadier Sir Alistair Gordon Lethbridge-Stewart.

That reunion really shouldn’t have moved me as much as it did. But seeing the Doctor finally concede to military protocol, saluting the only man in the universe he ever thought worthy of it, just got to me.

And the episode wasn’t done yet. After Danny’s farewell to Clara, there was one more goodbye left to endure, as the Doctor and Clara parted with a hug and two final lies. They meant well – each just trying to say “Hey, it’s OK. I’ll be OK” – but we know they’re not OK. And I think they know it too.

Nothing can put you through the wringer like Doctor Who when it’s on point. And on the whole, Series 8 was very much on point. There’s an energy to the show that I haven’t seen in years, a feeling that everyone is trying. And so much of it comes down to Peter Capaldi. His performance has been so energetic, so mercurial, so new, that everyone around him has had to elevate themselves to keep up, from Jenna Coleman to Samuel Anderson to all the writers and directors. It’s really been something to behold, and if Doctor Who were running on AMC or HBO, I’m convinced that we’d be hearing some Emmy buzz right now.

And so, that’s the end for now. What happens next? The Doctor and Clara are both at their lowest. We’ll likely see the Master return, but I believe Danny is well and truly gone. Our heroes are both alone once again.

Of course, even at his best Moffat can’t leave well enough alone, and a mid-credits deus ex machina promises “to get this sorted, and quickly.” (To be fair, that deus ex machina happens to be Nick Frost as Santa Claus, and that’s a performance I’ve had on my dreamlist for a long time, so I’m really quite OK with that.) So there’s the hope that the Christmas special will see our friends come out of the dark again.

And there’s the hope in knowing that the Doctor has finally found the answer to his question:

I am not a good man. And I’m not a bad man. I am not a hero, I’m definitely not a president, and no, I’m not an officer. You know what I am? I am an idiot, with a box and a screwdriver. Passing through. Helping out. Learning.

Thank you for passing through this rather fantastic season with me. Until next time…