There’s always a risk you take when you try to build a supporting character into the lead.

As a rule, supporting characters exist to allow us to better understand the “hero” of the story. As a rule, they don’t have quite enough story of their own. As a rule, they’re not designed to carry their own shows.

As you’ve likely heard by now, Better Call Saul brings us back into the world Gilligan created with his masterpiece Breaking Bad. It’s the Albuquerque of Walter White, but there’s a twist: We haven’t met him yet. 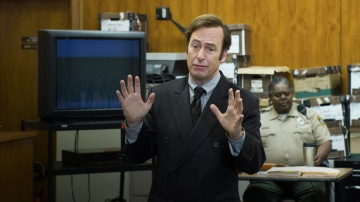 This time, our hero (such as he is) is Odenkirk’s Jimmy McGill, a frustrated public defender trying to build his own legal practice some six years before Walt’s fateful diagnosis. We already know that just as Walt evolved into Heisenberg, Jimmy will one day become Saul Goodman, the criminal lawyer. And knowing that makes the series premiere that much more powerful.

The opening of “Uno” takes us right back into Saul’s world. But it’s not where we expected to be. And Saul’s not who we expect him to be. He’s not Saul, but he’s not Jimmy either (and more than that I cannot spoil). As directed by Gilligan, this sequence is as tense, as dark, and as poignant as anything on Breaking Bad, and it sends a clear message: Everything that will follow, everything that will happen to Jimmy McGill, will matter.

Before long, we’re introduced to most of the players in Jimmy’s game (though calling it a game might give him too much credit as a player). We meet his brother Chuck (the ever reliable, ever excellent Michael McKean), a more successful lawyer who has suffered a massive breakdown of some kind. We meet the other lawyers in Chuck’s firm (Patrick Fabian and Rhea Seehorn), whose relationships with the McGills, separately and together, are vaguely complicated. And we meet the parking attendant at the courthouse in Albuquerque, one Mike Ehrmantraut (again, Jonathan Banks, who only needs that single scene to remind us of why he is one of the great character actors).

Through it all, the episode takes its time. Things happen, some of them hilarious, a couple of them shocking. But Gilligan, as writer and director, knows better than to reveal everything at once. There are explanations we don’t get, motivations we don’t understand, plot threads that aren’t woven together for us. We’re left to figure everything out as the series goes along, but we’re given just enough to want to go along with it. It’s a fantastic game of unknowns.

But the most impressive quality of Better Call Saul (and it’s a much longer list than I can let on here) is its utter, perfect confidence. Nothing in “Uno” betrays any kind of fear. There’s no sense that Gilligan is afraid of falling short of Breaking Bad‘s glory. Instead, the series strides ahead with the kind of confidence Jimmy just doesn’t have yet. 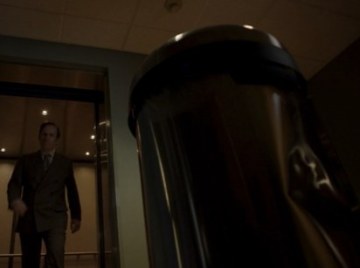 And if Gilligan has that confidence, Odenkirk more than shares it. He knows exactly when to suggest Saul in his performance, and when to hide him altogether. He knows when to show bluster, and when to show vulnerabilty (and the idea of Saul Goodman being vulnerable might be the most shocking thing in the entire episode). It’s a smart, cocky, dark, funny performance, and I really want to call it brave as well. Either way, Odenkirk owns the screen.

Familiar as it is, Better Call Saul never feels like a retread. It never feels like another dash to the well of money. Gilligan and Odenkirk are just too good for that, too dedicated to crafting a character and series that live and breathe their own air. Any doubts you may have about this series could well vanish before Jimmy leaves the courthouse.

Is it as good as Breaking Bad? Come on, it’s just one episode. It’s much too early for that kind of comparison, and I wouldn’t want to go there anyway. But if the rest of this first season is half as good as the premiere…

If you missed “Uno” (either last night or in tonight’s repeat), you can watch it online for the next thirty days at AMC’s website. And you really, really should.

I’ll keep up the reviews throughout this first season, so I hope you’ll follow along. Look for my take on “Mijo” soon.

Until then, thanks for making the call…

One thought on “How Jimmy McGill Broke Bad”