I’m really just speaking for myself, I know, but I think one of the great hooks of Better Call Saul is the appeal of looking for that moment, or that series of moments, that shapes the hapless PD Jimmy McGill into the sharp manipulator Saul Goodman.

And one of the great hooks of watching the premiere was seeing the moment when Jimmy hatches his first Goodmanesque scheme, his first plan to gain him notice, money, renown, respect.

So, of course, one of the great hooks of watching the next episode is seeing how that plan turns out.

Written by Peter Gould, and directed by Michelle MacLaren (one of Breaking Bad‘s best directors), “Mijo” picks up a few minutes before “Uno” left off. Jimmy has hired a pair of twin skateboarders to work their injury scam on a potential client. Unfortunately for him – and especially for them – he’s directed them to the wrong car, at the wrong address. So it isn’t long before the three of them find themselves held captive by a man we already know to be very, very dangerous. 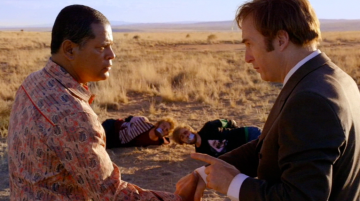 The last-second appearance of Tuco Salamanca at the end of “Uno” wasn’t just a great Easter egg for Breaking Bad fans. It raised the stakes for Jimmy. Now, he’s forced to plead his case, and the case for his accomplices, before a judge who’s all too prepared to skip jury and go straight to executioner.

That sequence, taking up most of the first half of the episode, is a masterwork of humor, horror, and nigh unbearable tension. It’s marked with the kind of writing, directing, and acting that made Breaking Bad so irresistible, made even sharper by six years of practice. As Tuco, Raymond Cruz isn’t simply terrifying – he’s observant, and even pretty charming. And Bob Odenkirk gives Jimmy the closing argument of his life.

Somehow, Jimmy manages to earn the respect of Tuco and his associate Nacho (Michael Mando). But though he escapes with his life, his life has changed. He’s been fully immersed in a world he was only vaguely aware of before. He’s seen the power his words have. He can’t simply go back to the world of a public defender (a life depicted in another brilliant MacLaren Montage). Nobody respects him there.

So when the world that does respect him – the criminal world – comes to Jimmy’s door with a visit from Nacho, he’s left with a choice he can’t simply refuse.

I know, I know. Last time I tried to shy away from any comparisons to Breaking Bad. But full disclosure must prevail. Right now I think Better Call Saul is as sharp and confident, as chilling and funny, as smart in its beginning as Breaking Bad was in its prime (and bear in mind that I thought Breaking Bad was ALWAYS in its prime).

And it’s just getting started…

Thanks as always for following along. Until next time…

One thought on “Jimmy McGill And The Ugly”