You’ll remember (especially since it was only last week) that I was disappointed in Doctor Who‘s prior episode, “Under the Lake.” After the fantastic opening that was “The Magician’s Apprentice” and “The Witch’s Familiar,” the storytelling in this Part 1 just didn’t seem to measure up by comparison.

But it’s been a long while since we Whovians have seen a season built entirely on multi-part stories, as Series 9 has promised. When a narrative is allowed to unfold over two or more episodes, you have to look at the parts in the context of the whole. And when you do, things that might not work in the beginning make a lot more sense by the end.

Which is to say that I appreciate “Under the Lake” a lot more now that I’ve seen “Before the Flood.”

When we last left Twelve and Clara and the survivors of the Drum, they’d been separated by both time and space. While Twelve took Bennett and O’Donnell with him to investigate the past behind their present, Clara was trapped in the base with Cass, Lunn, and an all new ghost: the Doctor. 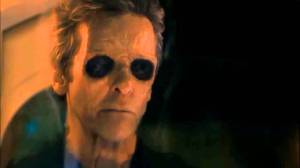 (Long aside: Ghost Twelve was hard to watch for me. Not so much because I’ve invested so much in the character – we all knew he’d be OK – but because those hollowed-out eye sockets deprived Peter Capaldi of two of his greatest strengths as an actor. When you’re working with the eyes that gave us both “Don’t ever call me English again” and “Do you think I care for you so little that betraying me would make a difference?”, one does not simply black them out.) 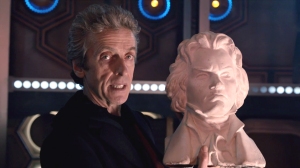 But before we get back into the action and exposition, Twelve has a tangent for us. The episode’s opening scene is another Capaldian monologue, addressed to us, in which The Doctor uses a hypothetical story of Beethoven as an excuse to riff on 1: the inherent paradoxes of time travel stories (which all but screams THIS WILL BE IMPORTANT LATER), 2: Beethoven’s Fifth Symphony, and 3: the Doctor Who theme itself. (Seriously, I hope the show keeps that guitar version – played by Capaldi himself – for a little longer. It’s just perfect.)

Then we get back to the story proper. As Twelve, Bennett, and O’Donnell search the abandoned town that will one day become the Drum, Clara, Cass, and Lunn try to understand what Ghost Twelve wants, and why he hasn’t done what they think he’s there to do. Tensions build, and one more life is lost (in a scene that has surprising weight and feeling to it – honestly, this one hurt), before Twelve finally confronts the force behind it all. 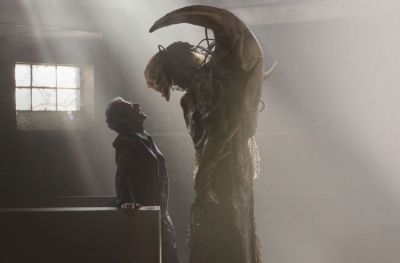 The Fisher King is a monster worthy of Doctor Who. It took three men to portray the character: Neil Fingleton wore that massive costume, Peter Serafinowicz brought his marvelous voice, and Corey Taylor (yes, Corey Taylor of Slipknot – also a longtime Whovian) screamed the screams. Together – and with no small help from the creature’s designers –  they birth a creature so gruesome, terrifying, and hateful that his ultimate defeat is so incredibly satisfying (especially since it follows another wonderful Man That Stops The Monsters speech from Twelve).

With that, Twelve returns, the survivors are rescued, love is allowed some measure of triumph, and Twelve and Clara make their way toward the stars again. But there’s one question left to answer: What inspired his plan? Did the past dictate the future, or did the future dictate the past?

Or, as Twelve puts it in the episode’s final line, “Who composed Beethoven’s Fifth?”

I loved this episode. Unequivocally, unabashedly loved it. Whithouse’s script, the performances, the direction and cinematography (including a great use of the Jaws Zoom) – everything works so well that I’ve even come to appreciate the extended setup of “Under the Lake” for making this payoff possible.

You’ll recall that last week I was rather taken – and, I’ll admit, possibly a little smitten –  with the character of Cass. She wasn’t just a strong character – as written by Whithouse and portrayed by Sophie Stone, she was a COMPLETE character, and I found myself more invested in her relationship with Lunn than I had expected. 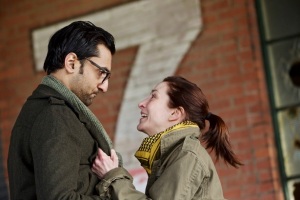 That investment remains strong in “Before the Flood,” and Stone and Zaqi Ismail are still wonderful. But this week, it also carries over to Bennett and O’Donnell, and their relationship (as played by Arsher Ali and Morven Christie) is every bit as affecting, and even more bittersweet. I don’t think I would have been able to care as much as I did about them without the time and effort spent on making us care about Cass and Lunn before them.

Which brings us back to the show’s central relationship. If Clara is the lens through which we see The Doctor (the companion’s most important role), then the survivors of the Drum are the lens through which we see the two of them together. When Twelve tells them “None of you have chosen anonymous or selfish lives,” he could just as easily be talking about himself and Clara.

They’ve chosen a life of exploration and adventure and discovery (and of course, that kind of wanderlust is the very heart of The Doctor’s personality). And they’ve committed to live that life without regret, no matter what happens.

But sooner or later something always happens. And with Jenna Coleman leaving at some point this season, we already know it will. Which brings just a little more emotion to their scenes together.

And that’s my review for this week. I’ll be back in six or seven days to talk about “The Girl Who Died” – and I’m pretty excited about that one, since Jamie Mathieson is back to [co-]write it (and the two episodes he wrote last season turned out really well.)