The thing I’ve noticed about my Favorite “Forgotten” Films series isn’t that most readers actually remember the films I’m writing about (the series began when I realized that everyone I know seems to recall these films, hence the use of quotation marks).  It’s that nobody is surprised I love them.  I’m not sure whether that’s a comment on how great these films are or on how well you really know me, though I appreciate it as a compliment either way.

That in mind, I’m fairly sure today’s entry will maintain the streak, as the film in question occupies a special place in a lot of hearts beyond my own… 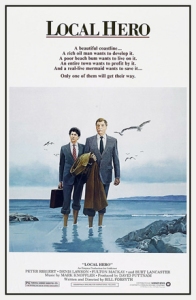 Written and directed by Bill Forsyth, Local Hero begins as a “save the farm” movie, with the twist that it’s told from the point of view of the Evil Developer.  Here, the farm is a village on the coast of Scotland, and the developer is oilman Felix Happer (Burt Lancaster, in one of his finest performances), who wants said village for his refinery.  To make the sale happen, he sends a young executive named MacIntyre (Peter Riegert) to Ferness, pretty much because his name is MacIntyre.  (That Mac is not actually Scottish is neither here nor there.)

Forsyth’s hand on the story is always quiet and gentle, less interested in its conflicts than in enjoying the company of its characters.  And the characters are people whose company are well worth enjoying.  From the town’s innkeeper/accountant/de facto leader (Denis Lawson); to Ben, that One Old Man (Fulton Mackay); to Mac’s actually-Scottish counterpart (Peter Capaldi), who falls for a woman who may or may not be a mermaid (Jenny Seagrove); the people you meet in Ferness are people you’ll want to spend much more time with than the film can allow you.

And then there’s Felix Happer, who, as we quickly discover, is not evil at all, but instead deeply lonely.  Troubled by something he can’t define (not to mention a therapist whose idea of therapy is to heap abuse on him), Happer looks to the stars to find what’s missing in his soul.  And when Ben throws his spanner into the works, the oilman’s response is both unexpected and pitch-perfect.

It all comes together in an ending so well written, so well acted, so well scored (to encompass the beauty of this soundtrack, I need say only two words: “Mark Knopfler“), and so well directed that you find yourself surprised at how, completely beyond your notice, Forsyth has managed to weave the film’s various threads – comedy, drama, and not a little magic realism – into something that’s at once familiar and truly original.  See it, and there’s a good chance you’ll fall in love with it too.

Thank you once again for following along.  Until the next time, “be seeing you…”