The beginning of the holiday season is very personal to each of us. For some, it may be the day after Thanksgiving. For others, it may be the first time It’s a Wonderful Life or Elf or Die Hard airs.  (I’ll admit, I don’t get that last one, but that’s probably just me.)

For me, it’s really quite simple:

For as long as I can remember, the spirit of my holidays has been defined by A Charlie Brown Christmas, and especially by Vince Guaraldi’s magnificent score.  (Of course it was my introduction to jazz, but that’s probably a story for another day…)

And at the heart of Charles Schulz’s classic story is that tree.

So, me being me, I was thrilled when my mom gave me, as an early Christmas present, a replica of that very tree.  I was really looking forward to setting that tree up on my desk.

Now, when you unbox a Charlie Brown Christmas tree, the first thing you’ll discover is that there’s some “assembly” required.  Granted, it’s not very much, but you do have to set up the tree stand, attach the tree, and then work it into shape.

It’s that last part, the shaping of the tree, that really surprised me.  Working with those branches became something like bonsai, a slow and gradual process where you carefully move them until the tree’s true form is revealed.  It’s almost a kind of meditation, a clearing away of stresses and distractions until you’re left with just the peace of the moment. 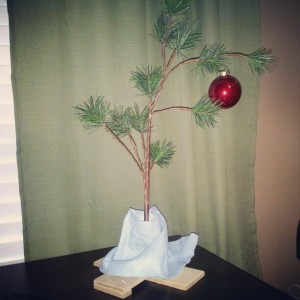 It was a much more personal experience than I’d expected, and I wonder if others have experienced something similar.  It’s entirely possible that it’s just me.

Thank you as always for following along on the journey.  Until the next turn, “be seeing you…”