50 years ago today, two teachers got a little too curious about one of their students, and decided to follow her home…

…thereby setting in motion a chain of events that would change the history of the universe.

Or at least the history of science fiction.

Since that first episode aired, Doctor Who has redefined and reinvented itself well beyond the myriad regenerations that have seen its hero revived and recast. From William Hartnell to Patrick Troughton to Jon Pertwee to Tom Baker to Peter Davison to Colin Baker to Sylvester McCoy to Paul McGann [to John Hurt] to Christopher Eccleston to David Tennant to Matt Smith, and soon to Peter Capaldi!!, The Doctor has changed, evolved, and renewed not only himself, not only his show, but also the insane devotion of its fans.

Mind you, the word “insane” is not intended as any kind of deprecation. We Doctor Who fans really are a mad lot, and grow madder with each new incarnation. I can’t explain that madness, but I love us for it.

I was born during the Pertwee era (and it always gives me a little swell of pride to be able to say I was introduced to the world in the same year as The Doctor’s great arch-nemesis, The Master), but didn’t really become aware of the show until well into Tom Baker’s run. And even then, I never watched a full story until the 1996 TV movie that until very recently marked McGann’s only onscreen appearance in the role. And even then, it wasn’t until many years later that (inspired by the 2005 revival) I started watching the show in earnest.

But when I did, I was pretty much irretrievably hooked.

And again, I don’t know why.

Is it the concept? I’ve always been a sci-fi geek, and I’ve always had a weakness for time-travel stories. So maybe.  But that’s not all of it.

Is it the characters? I’ve fallen for so many of them – not just The Doctor himself, but the companions, the monsters, even the villains. So maybe. But that’s not all of it.

Is it the writing? From the beginning, Doctor Who has always been as much about its writers as its actors (in fact, it took 33 years before the actors were even mentioned in the opening credits, but the writers were there almost from the beginning). And from Robert Holmes to Douglas Adams to Neil Gaiman to Richard Curtis to so many others, it’s had some wonderful scripts. So maybe. But that’s not all of it.

Is it the effects? The low-fi production values of the classic series have an incredible charm to them. And the digital marvels of today are good, without being too good (it wouldn’t be Doctor Who if the effects were THAT good). So maybe. But that’s not all of it.

Is it the music? Ron Grainer and Delia Derbyshire did produce one of the weirdest and coolest TV themes ever. So maybe. But that’s not all of it.

So what is it?

In the end, I really don’t know. And maybe I’ll never figure it out.

But maybe THAT’s the answer. The whole being so much greater and so much more mysterious than the sum of its parts. As they say of that TARDIS, bigger on the inside.

And so, today I celebrate a show that kind of defines me, in ways I can’t well articulate. Today I look forward to whatever comes next.

And today I thank everyone who has had a part in the show’s legacy. From Sidney Newman and Verity Lambert and Waris Hussein and Terry Nation, and all the producers and directors and writers to follow; to all the companions and villains and monsters who have delighted and menaced us over this half century; to more cast and crew than this mere post can do justice; to all the Doctors of our past, present, and future; and to all the fans who have shared in this adventure. 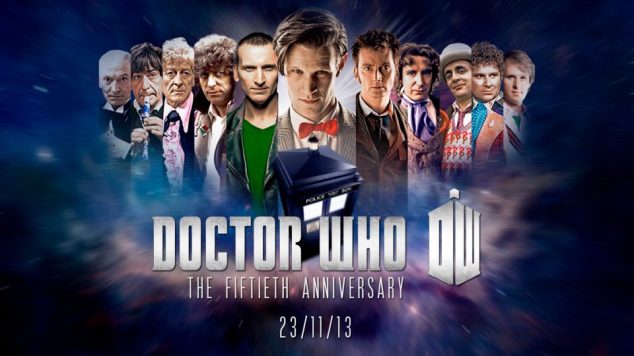 And with that, I’m off. I have an appointment to keep…

Thanks as always for following along. Until next time, allonsy!