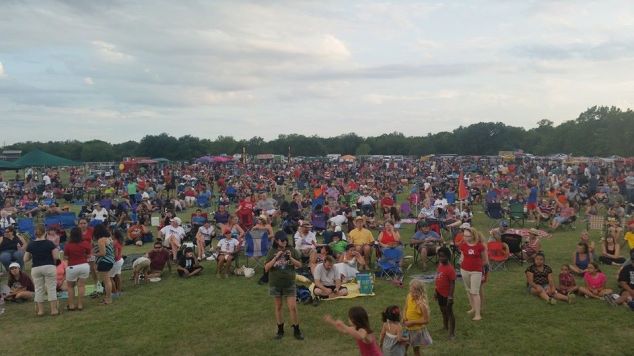 How I ended up stage-managing a 4th of July celebration for an entire city, I’m still not altogether sure. There’s a lot about the last few weeks that I’m still processing.

It started when Nikki was hired to help produce it. I know that much.

But I’m getting slightly ahead of myself. Let me backtrack a few steps…

For 20 years, the City of Leon Valley has hosted its own 4th of July parade. Of course, many cities and towns in the U.S., large and small, do that, and have done that since at least 1885. (Bristol, Rhode Island. I found that out when I was researching fun facts for our MCs to share throughout the day.)

But for 2014, the city wanted something more ambitious. They wanted a full-on celebration to follow right after the parade, with performers and vendors and all the rest of it. They wanted food, fun, and fireworks. And they wanted to show off everything Leon Valley had to offer.

So they turned to Mike De La Garza, a PR and marketing specialist, to make that happen.

And Nikki turned to me.

Working with Mike and Kristie Flores (Leon Valley’s Director of Community Development), we’d help secure the talent, schedule their performances, and make sure all necessary Ts and Is were crossed and dotted. In other words, all the usual processes I’ve learned from working with Nikki and Chadd over the last seven years.

The days went on, and we built up a pretty stellar lineup of talent:

And then, there were the myriad vendors, such as SubZero Ice Cream (whose yeah-science approach to frozen treats must be seen, and tasted, to be believed) and 1% Realty (who brought their very own fortune teller, the Great Zambini). And our media sponsor, KSAT 12, who brought along the stars of their upcoming SA Live, and a fun green-screen attraction (here’s Nikki’s stint as “Weatherperson for a Day”).

And that’s where the stage manager part comes in. On the day of the event itself, I’d have to make sure that the artists arrived on time; that they, and we, had everything necessary to make the performance happen; that all the necessary paperwork was signed and in order; and that any issues that might arise were resolved as smoothly and quickly as possible.

All of which I’d done before. But not for an event quite this size. Not for an entire city.

This was the ultimate test of everything I’d learned since I first walked onto the set of Dating Danielle. I’d need to remember and apply seven years worth of experience, everything I’ve learned. And I’d be lying if I said I wasn’t a little nervous about that.

But I was part of the best kind of team. The kind where everyone trusts and supports everyone else. So I did my best to live up to that.

It’s hard to put the experience of the day into words. It was a day of constant watching (and the performances, to understate it, were well worth watching), constant motion, constant awareness. But I’d be lying again if I said I wasn’t having a lot of fun by the end of it (as you can probably tell from my Instagram feed). And we’ve since received some wonderful notices from people who were there.

Nikki tells me I should be proud of the work I did that day.

And now that I’ve had a couple of days to put it all into perspective… I am.

But it wasn’t just my work. I have a lot of people to thank – those I’ve named, and those I haven’t. If you’re on that list, you helped make the job that much easier, and I truly appreciate you for it.

I learned a lot that day. And now I get to apply that to whatever comes next.

Thanks as always for following along. Until the next adventure, allonsy…