When you’re a film music geek, you’re very familiar with the more popular labels that cater to your tastes. Intrada, La La Land Records, Varese Sarabande – of course they’ll carry many of the major score releases, but when you’re looking for the kind of titles only a hardcore film music geek would look for, that’s when they really shine.

I have Intrada to thank for the three scores in today’s spotlight. Compared to last week’s selections, I’d say they’re deeper cuts. And that’s part of the beauty of them.

Jerry Fielding, Beyond the Poseidon Adventure

If you’re a layman, you might not know his name as well, but the late Jerry Fielding was one of the most in-demand composers of the 60s and 70s. He was all over TV (including Star Trek and Mission: Impossible), and he scored films for the likes of Clint Eastwood and Sam Peckinpah.

I really don’t know enough of Fielding’s work. But the more I learn about film music – and I still have a LONG way to go – the more his name keeps turning up. His fans are a large and loyal lot. And after listening to Beyond the Poseidon Adventure, I understand why. 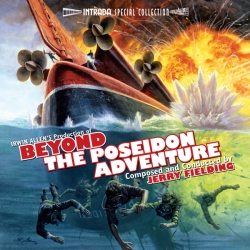 I haven’t seen Beyond the Poseidon Adventure, but I grew up with that kind of all-star disaster-adventure movie. And Fielding’s score is a terrific example of the genre. It has that orchestral vibe you can only hear in a 70s score – it’s in the percussion, it’s in the strings, and it’s in the way it allows its melodies to build and unfold. It’s a great stand-alone work.

Unfortunately, this release is sold out. But I was fortunate enough to pick up a copy while it was still available, and now I want to seek out every Jerry Fielding score I can find. And you should too. He’s worth the effort.

Michael Small is another composer who was all over the 70s, with his scores for thrillers like The Parallax View and Marathon Man. But sadly, I know less of his work than I do of Jerry Fielding’s. 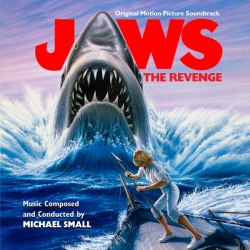 Jaws: The Revenge is a near-textbook example of what I like to call “scoring the film that should have been made.” I have seen it, and it’s sorely disappointing at best. But that soundtrack is pretty fantastic.

If Small was ever concerned about working in the shadow of John Williams’s iconic score for the original Jaws, his own work betrays no apprehension. That two-note Williams theme gets its share of play, but Small finds his own voice for the film, creating an atmosphere of urgency and dread that the rest of the film never reaches. And the action cues of the third act deliver an intense payoff.

This one is still available through Intrada, so check it out.

David Shire is another great composer of the 70s, but I’m a little more familiar with his work, as he scored two of my favorite films of the era, The Conversation and The Taking of Pelham One Two Three. He’s still active today, most notably on David Fincher’s Zodiac. 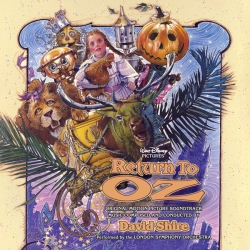 Thirty years ago, Shire composed the score for Return to Oz, which remains the only film directed by the great Walter Murch. Few people saw the film then – nobody was ready for an Oz story that didn’t shy away from the terrors Dorothy faced. It’s since become a cult classic, of course, but having seen it some years back, I think it deserves an even better reputation.

Shire’s music is at once familiar and otherworldly. The Americana of the Kansas scenes gives way to the wonder and dread of Oz, before finding its way back to the comfort of home (but it’s a hard-earned comfort, and not quite the same as it was before). He pulls out all the stops, and the result is one of the most beautiful scores to come out of the 80s.

Return to Oz is available on Intrada’s website, or from Creature Features (where you can get a copy signed by David Shire!). Either way, you really should have this one in your collection. It’s an essential.

And that’s it for Film Music Friday. Thanks as always for reading and listening along. Until next time…